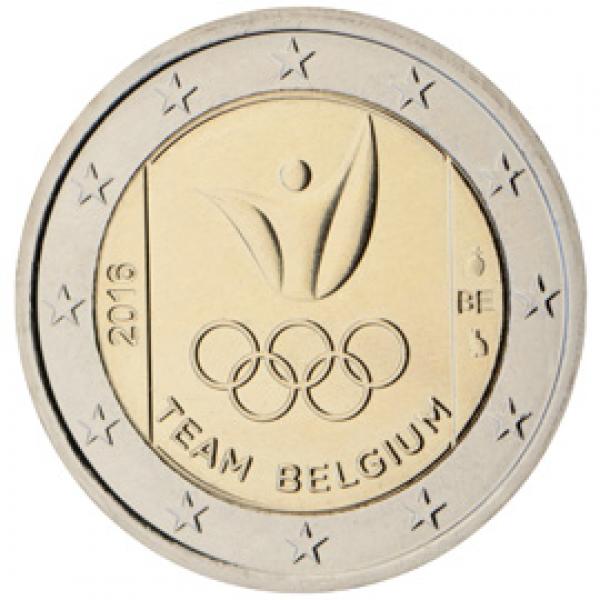 Description: The inner part of the coin depicts, from top to bottom, a stylised figure, the five Olympic rings and the inscription ‘TEAM BELGIUM’. The year 2016 is written on the left-hand side of the coin. The country code ‘BE’ appears on the right-hand side of the coin, between the mark of the Brussels mint, a helmeted profile of the archangel Michael, and the signature mark of the Master of the Mint. The coin’s outer ring bears the 12 stars of the European Union. 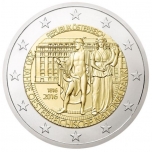 Austria 2€ commemorative coin 2016 - 200 Years of the Österreichische Nationalbank
Description: The design depicts a carved relief with two gods from Roman mythology standing before the entrance to the main building of the Oesterreichische Nationalbank (OeNB): to the left, Mercury, the messenger of the gods and the god of merchants and commerce; to the right, Fortuna, the goddess of fate and prosperity, who is portrayed with a horn of plenty. The background detail, running from the left to the right edges of the core, shows the OeNB’s main premises. An ornamental band skirting the bottom of the coin centre evokes the red-white-red pattern of the Austrian national flag, with hatched vertical lines symbolising the colour red, as laid down in the rules of heraldic design. The years ‘1816’ and ‘2016’ to the left of Mercury refer to the OeNB’s founding year and its bicentennial. The inscriptions running along the edges of the gold-coloured centre read ‘Republik Österreich’ (Republic of Austria) and ‘200 Jahre Oesterreichische Nationalbank’ (200 years of Oesterreichische Nationalbank). The coin’s outer ring bears the 12 stars of the European Union.