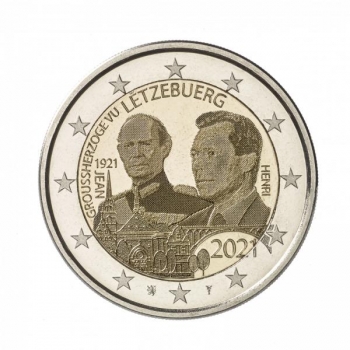 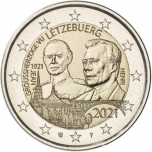 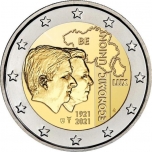 Description: The national side of the coin features the effigy of the Belgian King Philip I and that of Grand Duke Henri of Luxembourg. In addition, both countries are depicted, with the mention of the Economic Union, and the years 1921 and 2021. As the Royal Dutch Mint will strike the coins, the mintmark of Utrecht, a mercury staff is located on the bottom together with the Belgian mint director mintmark, the coat of arms of the municipality Herzele. It also contains the initials LL, referring to the designer of the coin, Mr. Luc Luycx. The coin’s outer ring bears the 12 stars of the European flag. 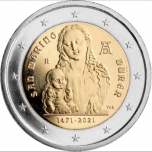 Description: The design depicts the Virgin Mary with Baby Jesus, detail of the painting ‘Madonna with Child’ by Albrecht Dürer, kept in the Uffizi Galleries (Florence). At the left is the inscription ‘SAN MARINO’ and the mintmark ‘R’. At the top right is the monogram ‘AD’ with the initials of Albrecht Dürer and at the right is the inscription ‘DÜRER’. At the bottom are the initials of the author Valerio De Seta, ‘VdS’, and the dates ‘1471-2021’. The coin’s outer ring bears the 12 stars of the European flag.

Description: The design features a coat of arms with an armoured-clad soldier holding a halberd in his right hand and leaning with his left arm against a silver Baltic shield. The coat of arms placed on a beam is held by two lynxes. Below hangs a ribbon with a Latin inscription EX GENTE BELICOSISSIMA POPULUS LABORIOSUS (HARD-WORKING PEOPLE FROM A FIERCE TRIBE). The composition is surrounded by inscriptions LIETUVA (LITHUANIA) and DZŪKIJA, the year of issue (2021) and the mintmark of the Lithuanian Mint. The design is realised by Rolandas Rimkūnas. The coin’s outer ring bears the 12 stars of the European flag. 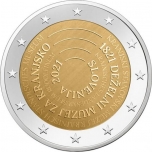 Description: The design was inspired by the belts from Vače Situla – one of the finest artefacts of situla art. These belts are a graphical symbol for layering history that the museum keeps for future generations. The design displays layers of the museum’s history with different names through its 200-year long history. The names are displayed in belts as they would have been if written on Vače Situla. The design includes the name of the country ‘SLOVENIJA’ and the year of issuance ‘2021’. The coin’s outer ring bears the 12 stars of the European flag.