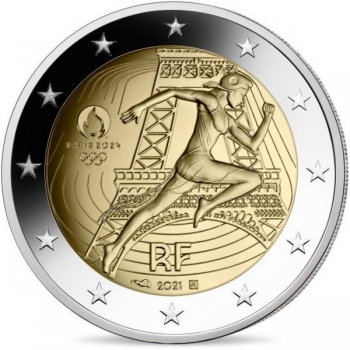 Description: The design represents Marianne, national figure and icon of French numismatics, running in an ‘old’ way in reference to the Olympic Games of the Ancient Era. Its silhouette blends with the Eiffel Tower, a key element of Parisian heritage, to form a common axis with the Iron Lady. In the background, an athletics track in which the emblem of Paris 2024 is inserted on the left side, is depicted. The year date, the mention RF and the mintmarks are inserted under the arch of the tower. The coin’s outer ring bears the 12 stars of the European flag. 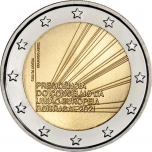 Description: The design depicts the representation of the link between the capital of Portugal and the others European capitals and thereby draw a map, within the lettering ‘PRESIDÊNCIA DO CONSELHO DA UNIÃO EUROPEIA PORTUGAL 2021’ (English – PRESIDENCY OF THE COUNCIL OF THE EUROPEAN UNION PORTUGAL 2021). The coin’s outer ring bears the 12 stars of the European flag. 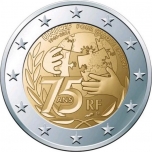 France 2€ commemorative coin 2021 - Unicef
Description: The design shows an allegory of the work of ‘UNICEF’ where the hands are a key element. One after the other they support the globe and are the link between the different areas of the Earth. The mention of the 75th anniversary as well as the laurels crown the ensemble accompanied by the acronym RF. On the upper rim, the name ‘UNICEF’ is inserted along with the relevant dates as well as the UNICEF motto ‘For each child’. The coin’s outer ring bears the 12 stars of the European flag. 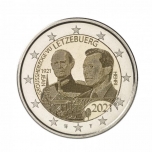 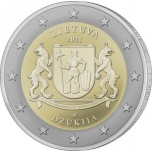 Description: The design features a coat of arms with an armoured-clad soldier holding a halberd in his right hand and leaning with his left arm against a silver Baltic shield. The coat of arms placed on a beam is held by two lynxes. Below hangs a ribbon with a Latin inscription EX GENTE BELICOSISSIMA POPULUS LABORIOSUS (HARD-WORKING PEOPLE FROM A FIERCE TRIBE). The composition is surrounded by inscriptions LIETUVA (LITHUANIA) and DZŪKIJA, the year of issue (2021) and the mintmark of the Lithuanian Mint. The design is realised by Rolandas Rimkūnas. The coin’s outer ring bears the 12 stars of the European flag. 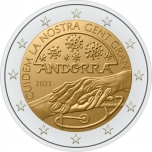 Description: The subject of the coin ‘CUIDEM LA NOSTRA GENT GRAN’ (taking care of our seniors) is symbolized by the image of the hand of a young person holding another hand that shows all the signs of aging, with a stethoscope below them. The name of the issuing country ‘ANDORRA’ encircling several reproductions of the SARSCoV-2 virus represents the State’s commitment to preventing its spread and caring for its citizens. The design also shows the date of issue ‘2021’. The coin’s outer ring bears the 12 stars of the European flag.