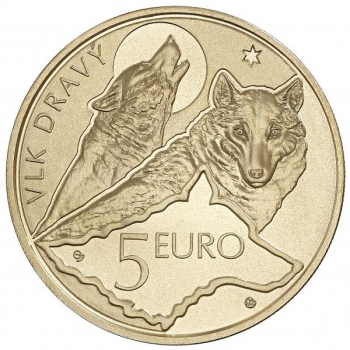 2. coin from the series “Fauna and Flora of Slovakia”.

Over the millennia of human society’s evolution, wolves have often coexisted with people. During the Middle Stone Age (Mesolithic), wolves began living in the vicinity of prehistoric hunters’ settlements and fed off meat leftovers. Wolves are found in various northern hemisphere habitats and are the second most widespread mammal on earth, after humans. They are a social animal, and their packs typically have between five and seven members. Weighing between 30 and 70 kg, wolves are classified as large carnivores. They have exceptional senses of smell, sight (night vision) and hearing, which they use to prey mainly on large ungulates. The way that wolves relentlessly run down their prey is captured by a Russian saying: “The wolf is kept fed by its feet”. This way of hunting was well applied in the forest-steppe environment where wolves evolved. Their pack structure allows wolves to hunt prey that are several times larger than themselves (such as red deer and elk) and to raise, on average, between four and ten pups each year. Food from the kill is shared between all members of the pack. All the adult pack members help with the care and rearing of the young by bringing them food. Altruism, in other words gratuitous service to others, is seen among wolves in the way they care for injured members of the pack. This feature is characteristic of evolutionarily advanced societies of other mammals: primates and human beings. The number of wolves in Slovakia is currently estimated to be between 300 and 600. Since Slovakia shares its wolf population with Ukraine, Poland and Hungary, it is difficult to give a more precise estimate of the number of wolves present in its territory.

The obverse of this euro collector coin shows an outline map of Slovakia in the lower part of the design. Contained within the map are the Slovak coat of arms and the year of issuance ‘2021’. Three wolves are depicted standing on top of the map, and a smattering of wolf paw prints appear within the map and outside it. A star is shown at the top right of the design, and the name of the issuing country ‘SLOVENSKO’ runs along the edge of the upper left quadrant.

The upper part of the reverse portrays two wolves, one of which is howling at the moon. At the top, to the right of the moon, there is a star in the night sky. The lower part of the image consists of the outline of a wolf’s head, within which is shown the coin’s denomination ‘5’ and currency ‘EURO’. In the left part of this space are the stylised letters ‘JO’, referring to the coin’s designer Josef Oplištil. Below the outline, at the bottom left, is the mint mark of the Kremnica Mint (Mincovňa Kremnica), consisting of the letters ‘MK’ placed between two dies. The words ‘VLK DRAVÝ’ are inscribed along the upper left edge of the design.
Similar products 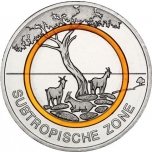 Obverse
At the core the German eagle, the mint letter and the date. The outer circle shows the face value, the name of the Federal Republic of Germany and the 12 stars of the European Union.
2018
BUNDESREPUBLIK DEUTSCHLAND

Reverse
A herd of goats under the shade of a tree and a barren landscape with only a few patches of grass depicting the typical flora and fauna of the subtropical climate zone. 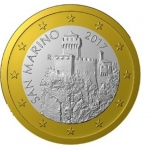 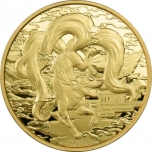 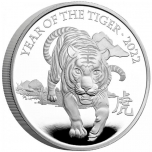 The traditions of the Chinese lunar calendar extend back thousands of years. Unquestionably, the largest and most exciting event in this traditional calendar is ‘Chunjie’, the Spring Festival. This national holiday in China is punctuated by Chinese New Year celebrations, helping connect families and individuals to traditions of countless generations before. According to the Chinese zodiac, the year 2022 is the Year of the Tiger. Along with being seen as adventurous, tradition states that those born in the Year of the Tiger share many of the animal’s desirable characteristics, including courage, confidence and bravery.
25,00 € 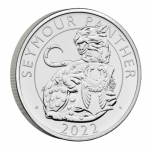 The first coin in the Royal Tudor Beasts Collection features the Seymour Panther, which was given to Jane Seymour by the king from the royal treasury of beasts. Depicted with flames coming out of its mouth and ears and known for its intoxicating fragrant breath, the fiery beast represents the union between a committed consort and a mighty monarch.
25,00 €