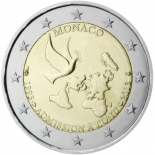 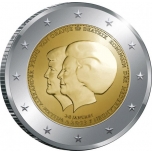 Description: The design depicts on the foreground the effigy of Queen Beatrix and on the background, partly covered by the effigy of the Queen, the effigy of the Prince of Orange. The circumscription around both effigies reads: WILLEM-ALEXANDER PRINS VAN ORANJE (crown symbol) BEATRIX KONINGIN DER NEDERLANDEN (mint mark) 28 januari 2013 (mint master mark). The coin’s outer ring bears the 12 stars of the European Union. 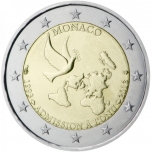 Description:The coin depicts a dove with an olive branch, with in the middle of the arc, on the left side the cornucopia, and on the right side the punch, as the workshop Paris Mint mark. At the top, in semi-circle, the indication of the issuing country ‘MONACO’ and at the bottom, in semi-circle, the inscription ‘1993 ADMISSION À L'ONU 2013’. The coin’s outer ring bears the 12 stars of the European Union.