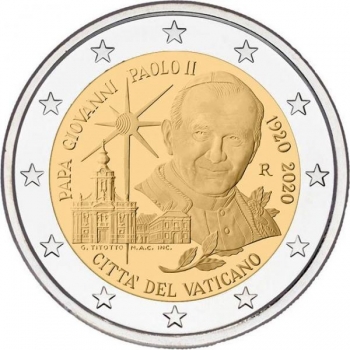 Description: The design features Pope John Paul II, the home where He was born and the Basilica near His home in Wadowice, Poland. At the top left, in semi-circle is the inscription ‘PAPA GIOVANNI PAOLO II’. At the right are the years ‘1920 2020’, and the mintmark ‘R’. At the bottom, in semi-circle, is the name of the issuing country ‘CITTA’ DEL VATICANO’. Under the image of the Basilica are the artist’s name ‘G. TITOTTO’ and the engraver’s initials ‘M.A.C. INC’ (Maria Angela Cassol, engraver). The coin’s outer ring bears the 12 stars of the European flag. 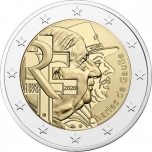 Description: The design represents two profiles of Charles de Gaulle at two different times. The profile in the background shows Charles de Gaulle in army general is uniform during the call to arms of the 18th June 1940 or during the liberation of Paris. The profile in the foreground represents Charles de Gaulle during his second presidential term of office. Finally, the mention RF is semi-integrated in a Lorraine cross, symbol of free France chosen by General de Gaulle in 1940. His dates of birth and death as well as the year date are also inscribed in the Lorraine cross. The coin’s outer ring bears the 12 stars of the European flag. 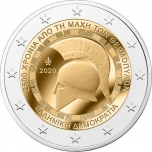 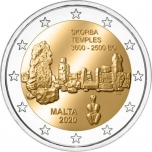 Description: The design features Skorba, a prehistoric temple located near the hamlet of Zebbiegh, in the northwest of Malta. The complex consists of two temples built side by side. These were built on a much older settlement remains of which were discovered outside the temple complex. Skorba lacks the monumentality of the other temples on the Maltese islands. Nevertheless, the site is of utmost importance having enabled archaeologists to set Malta’s prehistoric cultural sequence and establish that the islands were first inhabited at around 5 000 BC. The inscription ‘SKORBA TEMPLES 3600-2500 BC’ appears at the top of the design. At the bottom are the name of the issuing country ‘MALTA’ and the year of issuance ‘2020’. The coin’s outer ring bears the 12 stars of the European flag. 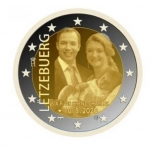 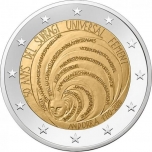