Sign Up for Newsletter
Home » The Twelve Olympians in the Zodiac - Apollo `Vs Gemini. Samoa 0.20 $ 2021 Gold plated Copper/Nickel coin 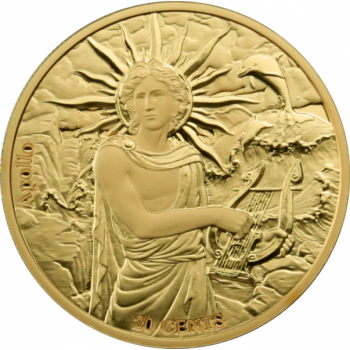 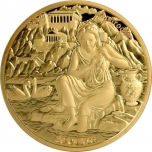 According to some astrologists, those born under the sign of Taurus love pleasure! They know how to enjoy life, and are sure to make the most of every moment - just like the Goddess Aphrodite!
35,00 € 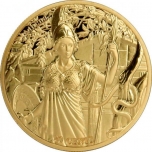 A twelve issue set, the Twelve Olympians of the Zodiac considers which of the traditional star signs coincide with the Gods of Olympus of Ancient Greece. For Athena, the decision is clear - Aries!

According to some astrologists, Aries is associated with creativity and thought, as well as the rising of the dawn, being the start of the Zodiac. All of these traits can be ascribed to Athena, as the offspring of Zeus. Intriguingly, the bird most associated with Aries is the owl... the bird widely used to depict Athena.
35,00 € 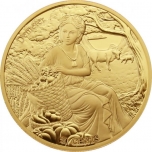 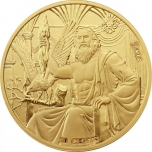 As the King of the gods, Zeus‘ connection with Leo is appropriate as it is the "king of the Zodiac signs". The connection gains a lot more weight in mythology: Zeus is closely associated with Helios, perhaps even more so than Apollo, as Helios is referred as "the eye of Zeus" and is referred as Zeus in his own Orphic hymn. Aether (the primordial light that illumines the Heavens) is "Zeus' power", and his role as the god of civilization, justice and law is very similar to that of sun gods like Shamash and Ra (Apollo also shares these traits, as he too is a god of justice and law). Zeus is outright referred as the Sun in some particular Greco-roman religious traditions like Pythagorean philosophy, where he is the supramundane Sun of the Olympians.As the Sun symbolizes the center, so is Leo's position in the Zodiac indicative.
35,00 €
Similar products 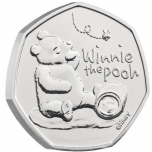 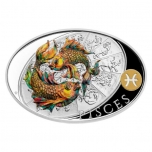 The silver coin of the Czech Mint from the gift series with motifs of 12 signs of the zodiac will become not only a beautiful, but also a valuable talisman for everyone who was born in the sign of Pisces.

Do you know why there are two fishes in the celestial constellation? This can be answered by ancient Greek myths about the monster Tyfon, from whom even the ancient gods themselves had to hide. Everyone turned into an animal out of fear, and the goddess of love Aphrodite and her son Eros chose a fish appearance. In order not to lose each other in a sharp stream of water, they tied their tails with a gibbon… The lives of Pisces in human form are ruled by emotions. They absorb the moods of their surroundings - positive and negative - and then behave according to them. Sensitivity and extraordinary sense of empathy make them great helpers who are always willing to lend a helping hand. However, their lack of self-confidence often leads to situations where they allow themselves to be abused. In addition to the constellation, the Pisces is also ruled by the planet Neptune. In astrology, it often points to individuals who love impersonally - such as humanity as a whole - which can sometimes lead to self-sacrifice, which the Pisces often commits.

The non-traditional oval-shaped coin bears a colored image of the Fish on the reverse side. Photographs or computer graphics were not used as a template for coloring - the author of the coin, Asamat Baltaev, DiS., created an original watercolor painting. The relief in the background of Pisces presents a disk with a dozen zodiac signs. The composition of the reverse side is then supplemented with the Latin inscription PISCES and the corresponding astrological symbol. Since the coins of the Czech Mint are licensed by a foreign issuer, the island of Niue, the obverse side bears its national emblem, the nominal value of ONE DOLLAR (NZD) and the year of issue 2021. All this is surrounded by twelve astrological signs. 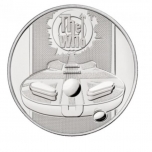 The Who’s first appearance on an official UK coin
Celebrate one of the most influential bands in music history
Features a design approved by the band
A great gift for music fans
Begin or continue your Music Legends collection
Discover the band’s explosive story and enjoy exclusive images in the coin’s packaging
Striking Standard - Brilliant Uncirculated Coin
25,00 € 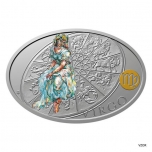 
The silver coin of the Czech Mint from the gift series with the motifs of the 12 signs of the zodiac will become not only beautiful, but also a valuable talisman for anyone born under the sign of Virgo.

Who was the mysterious girl who shines in the sky today in the form of the constellation Virgo? It is not entirely certain, but most likely it was Dike - the daughter of the ruler of the gods, Zeus, who walked among ordinary mortals and intervened against injustice. People therefore began to worship her as a judge and goddess of justice. Those who have been assigned the sign of the Virgin tend to be diligent, consistent and practical and we can rely on them. They want to have their life firmly in hand and achieve all their goals. They have their feet firmly on the ground, but their pragmatism can turn into pessimism, an unhealthy obsession with details and over-criticism.

The unusual oval-shaped coin bears a coloured image of the Virgin on the reverse side. No photographs or computer graphics were used as the basis for the colouring - the author of the coin, Asamat Baltaev, DiS., created an original watercolour painting. The relief in the background behind the Virgin presents a disc with a dozen signs of the zodiac. The composition of the reverse side is completed by the Latin inscription VIRGO and the corresponding astrological symbol. As the coins of the Czech Mint are issued with the foreign licence of the island of Niue, the obverse side bears its national emblem, the nominal value of ONE DOLLAR (NZD) and the year of issue 2021. All this is surrounded by twelve astrological signs. 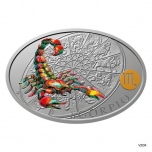