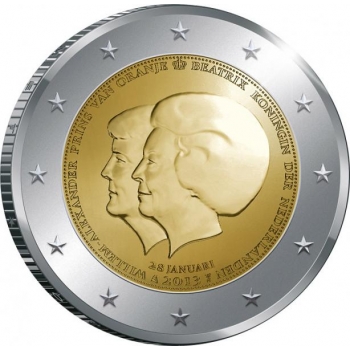 Price:
8,00 €
Feature: The announcement of the abdication of the throne by Her Majesty Queen Beatrix

Description: The design depicts on the foreground the effigy of Queen Beatrix and on the background, partly covered by the effigy of the Queen, the effigy of the Prince of Orange. The circumscription around both effigies reads: WILLEM-ALEXANDER PRINS VAN ORANJE (crown symbol) BEATRIX KONINGIN DER NEDERLANDEN (mint mark) 28 januari 2013 (mint master mark). The coin’s outer ring bears the 12 stars of the European Union.