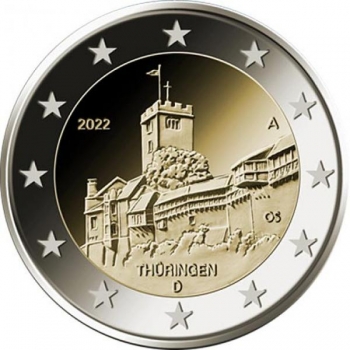 Description: : The design shows Wartburg Castle, the first German castle to be listed as a UNESCO World Heritage Site. The inner part also features the name ‘THÜRINGEN’ and the issuing country’s country code ‘D’ at the bottom, the mint mark of the respective mint (‘A’, ‘D’, ‘F’, ‘G’ or ‘J’) as well as the engraver’s mark on the right and the the year ‘2022’ on the left. The artist: Olaf Stoy (Rabenau). The coin’s outer ring bears the 12 stars of the European flag. 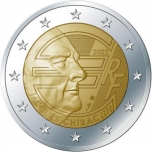 Description: President of the French Republic for two terms, Jacques Chirac was a major architect of the European construction. As such, he was President when the Euro was introduced in 2002, whose 20th anniversary we celebrate at the beginning of this year. The design shows a solemn profile of President Jacques Chirac looking towards the future. He is surrounded by several symbols representing his actions: a euro symbol, as sign of his involvement in the introduction of the Euro and his European spirit, and a French flag represented in heraldic colours, itself embellished with the RF as a reference to his presidency. His dates and name are inserted in the Euro’s logo. The mintmarks as well as the year date fit into the design. The coin’s outer ring bears the 12 stars of the European flag. 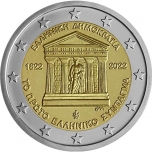 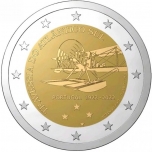 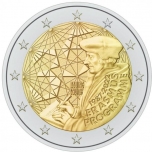 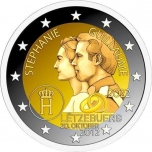