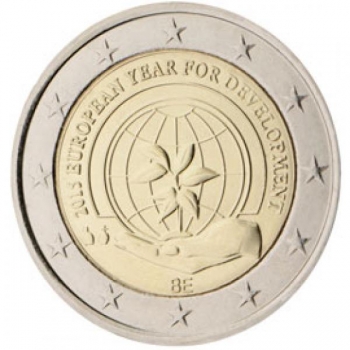 Description: The inner part of the coin depicts a hand holding a globe of the Earth with a plant in the foreground. The inscription ‘2015 EUROPEAN YEAR FOR DEVELOPMENT’ features in an arc above the globe. The country code ‘BE’ appears beneath the hand while the signature mark of the Master of the Mint and the mark of the Brussels mint, a helmeted profile of the archangel Michael, are to its left. The coin’s outer ring bears the 12 stars of the European Union. 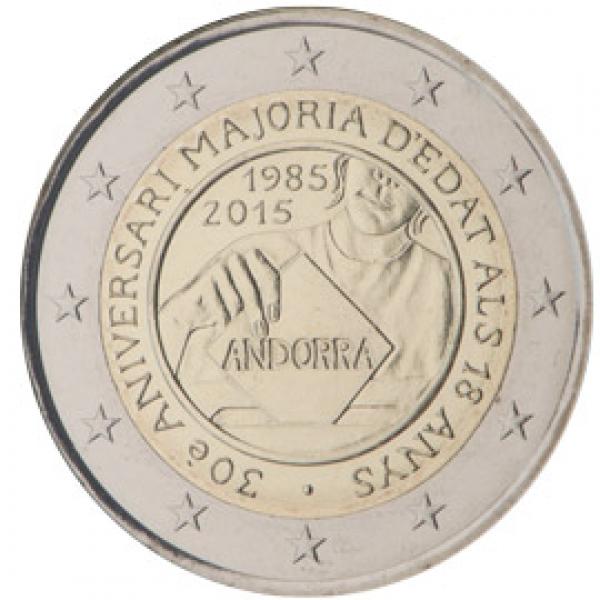 Description: The design shows a partial reproduction of a young person casting a vote. The ballot that the figure is holding reproduces the inscription ‘ANDORRA’. To the left of the figure there are the years that are being commemorated ‘1985’ and ‘2015’ (the latter is the year of issue of the coin as well). A shorter inscription of the commemoration surrounds the whole design ‘30è ANIVERSARI MAJORIA D’EDAT ALS 18 ANYS’ (30th anniversary Coming of Age at 18 years old). The coin’s outer ring bears the 12 stars of the European Union.