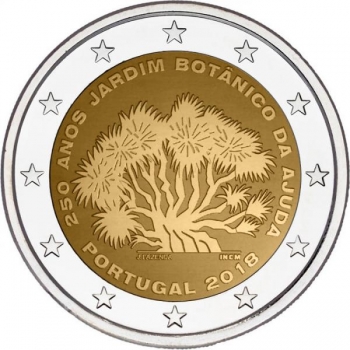 Description: The design shows a very old Dracaena tree that is in the Ajuda Botanical Garden premises and is a symbol of the garden. The Ajuda Botanical Garden is a Technological Support Unit of the Agronomy University. It plays the role of an infrastructure for education and research but is also open to the public. It was the first botanical garden in Portugal projected to preserve, study and collect the most numerous possible species from the plant world. At the top of the design, from left to right, in semi-circle, there is the inscription ‘250 ANOS JARDIM BOTÂNICO DA AJUDA’. At the bottom, from left to right, in semi-circle, there is the inscription ‘PORTUGAL 2018’. Right underneath the image of the tree, at the left side, there are the initials of the artist ‘J. FAZENDA’ and at the right side the mintmark ‘INCM’. The coin’s outer ring bears the 12 stars of the European Union. 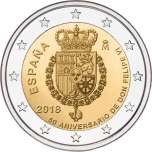 Description: The design reproduces King Felipe VI’s coat of arms. On the left hand side, in semi-circle, is the word ‘ESPAÑA’ and below the year of issuance 2018. At the bottom right, in semi-circle, is the inscription ‘50 ANIVERSARIO DE S.M. FELIPE VI’. The mint mark is represented at the top right. The coin’s outer ring bears the 12 stars of the European Union. 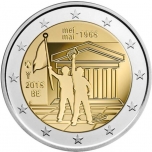 Description:The design represents students with a pamphlet and flag in their hands and refers to student demonstrations that took place in Belgium in connection with the sociocultural changes of May 1968. It was an important national event that shaped Belgium’s national politics and influenced subsequent Government reforms, now 50 years ago. The mintmark of Utrecht (the Mercury’s wand) is located on the left together with the Belgian mint master mark (the coat of arms of the municipality Herzele). The year mark 2018 and the country code BE are located at the left as well, just like the initials LL of the designer of the coin, Mr Luc Luycx. An auditorium marks the back, which is a reference to students. The coin’s outer ring bears the 12 stars of the European Union. 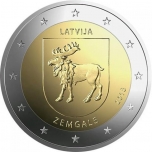 Description: The design shows the coat of arms of the region of Zemgale. At the top, the name of the issuing country ‘LATVIJA’ and at the bottom the inscription ‘ZEMGALE’. At the right hand side, the year of issuance ‘2018’. The coin’s outer ring bears the 12 stars of the European Union. 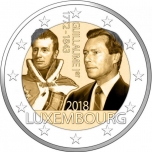 Description: The design shows on the right hand the effigy of His Royal Highness, the Grand Duke Henri, looking to the left and on the left hand the effigy of HRH the Grand Duke Guillaume Ist. Between both effigies are depicted vertically the year-dates ‘1772-1843’ as well as the name ‘Guillaume Ier’. At the bottom appears the text ‘LUXEMBOURG’ and the year-date ‘2018’. The coin’s outer ring bears the 12 stars of the European Union. 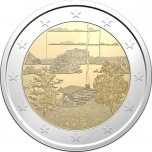 Description: The design shows a Finnish landscape with a typical Finnish lakeside sauna placed in the centre. The year of issuance ‘2018’ is placed at the centre bottom. The indication of the issuing country ‘FI’ is at the centre left and the mint mark at the centre right. The coin’s outer ring bears the 12 stars of the European Union.